The reconstruction work on the roof of the Auditorium finishes, recovering the characteristic sheet of water of the PRBB building.

The new water sheet has been designed with a completely new circulation system to maintain the water cleaner than previously.

For almost all July and August workers and machines could be seen demolishing and removing the debris of the Auditorium roof, followed by its reconstruction and the application of insulating products. Now, September begins with the Barcelona Biomedical Research Park (PRBB) showing off a new water sheet, an image of the building that will be familiar to many. As explained by the director of general services of the PRBB, Oliver Blanco: “We wanted to reconstruct the original water cover of the Auditorium in order to maintain the characteristic image that a few years ago gave identity to the building. Finally, we have recovered this architectonical feature of the PRBB”.

Since its construction, the PRBB building has become one of the most emblematic of Barcelona. Its uniqueness has been defined, on the one hand, by its peculiar architectural shape, and on the other hand by the water sheet that covered the Auditorium, which this summer has been recovered. Both features, and the fact the building is situated around the empty space of an inner square, have helped to create a highly successful scientific community.

According to the architects of the PRBB, Manel Brullet and Albert de Pineda, the central inner space of the building where the Auditorium is located is very influenced by the water sheet at the top, which makes the light more vibrant and connects the building with the sea. 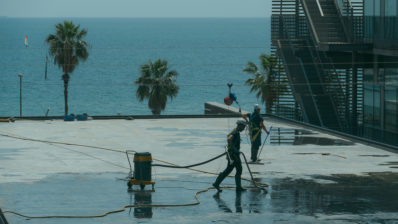 A panoramic view within the reach of just a few 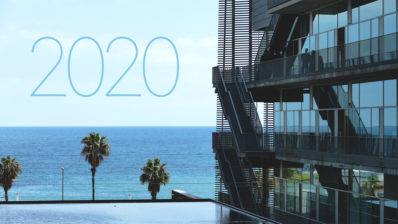 Resisting the pandemic: a good scientific balance in 2020

The rhythms of change: 15 years of the PRBB