Jordi Júlvez’s group at ISGlobal looks at the neuropsychological development of populations, focusing on how nutrition can counteract other factors that negatively affect neurodevelopment, such as pollution.

When Jordi Júlvez started his PhD, he was one of the first neuropsychologists in the field of epidemiology and public health. After three years at Harvard’s T.H. Chan School of Public Health, he returned to Barcelona, and since 2015 he has been a principal investigator at the Barcelona Institute for Global Health (ISGlobal), where he studies the environmental factors affecting neurodevelopment at the population level.

“Psychologists usually study a single individual. I look at the neuropsychological development of populations, from the beginning of life to old age”, he explains. In fact, brain plasticity is never lost. Even so, the bulk of brain development takes place in the womb. That is why many of Júlvez’s projects focus on this phase, like his study on what effect fish consumption in pregnant women has on the cognitive development of their children.

“I look at the neuropsychological development of populations, from the beginning of life to old age”
Jordi Júlvez

Large oily fish, such as swordfish or tuna, contain the neurotoxin methylmercury, but Júlvez has found that the beneficial effect of eating fish on a regular basis is much more potent than the neurotoxic repercussions. This is a result of its high levels of long chain polyunsaturated fatty acids, such as DHA. “Given a choice, I would recommend that pregnant women eat white fish or small oily fish, like sardines. But whatever they choose, they should eat fish!”, he says.

Júlvez’s group focuses mainly on how nutrition can counteract other factors that negatively affect neurodevelopment, such as pollution.

“Diet has a very important effect, especially on the brain. The European HELIX project looked at which of the 100+ environmental factors analysed were the 10 most statistically relevant, and 2 or 3 were diet-related. It is true that we are what we eat”, acknowledges the researcher.

Aside from life in the uterus, there are two more points in time when there is exponential neuronal development. One is up to the age of 2 or 3; from then on there is a very gradual deceleration. Adolescence is another very intense stage of neurodevelopment. There is a reactivation due to hormones and many synapses are created, especially in the prefrontal area, to enrich complex behaviour, including planning and emotional control. “It’s when we make the leap from a child’s brain to that of an adult”, explains the psychologist.

“The points in time when there is exponential neuronal development are when we are in the uterus, up to the age of 2 or 3, and adolescence”

That is why one of the projects they are currently working on right now, “Smart Snack”, focuses on this phase. This is a study of nutritional intervention at population level, comparing 350 adolescents who consumed an extra 30 g of walnuts a day for 6 months with a control group of 350 other boys and girls, who did not eat them.

The students were recruited from 12 secondary schools in Barcelona. They took cognitive tests before and after the intervention, to measure their attention, working memory, and executive function, and blood samples were taken from a subgroup. Some of the teenagers stopped eating the nuts after a few months (“long interventions are difficult for children and adolescents to follow”). However, those who continued to eat walnuts for more than 100 days had much higher levels of omega-3 fatty acids in their blood. Whether or not this physiological effect translates to a cognitive level is what they are now analysing.

Júlvez, who in addition to this project coordinates the neurodevelopment working groups of the INMA and HELIX cohorts, maintains his affiliation with Harvard’s T.H. Chan School of Public Health, where he takes occasional stays. Currently, he also has an open collaboration with the Barcelona Beta Brain Research Center of the Pasqual Maragall Foundation, focused on Alzheimer’s disease. “We like doing longitudinal studies, to look at how things that happen to you at the beginning of your life can continue to affect you over the years”, he concludes. 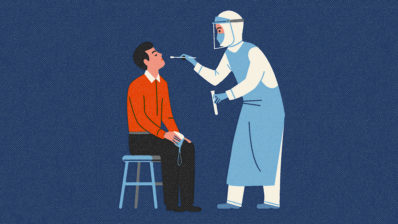