After going through a long selection process, four PRBB researchers will be able to finance their innovative research projects thanks to two international grants.

The Human Frontier Science Program (HFSP) is an international funding program that promotes intercontinental and interdisciplinary collaboration, funding innovative and risky life science projects. This year 2020, the HFSP has given 8 grants for young researchers and 20 grants for research programs, out of 702 applications from more than 50 different countries. Among the awardees we find Verena Ruprecht (CRG) and Oriol Gallego (DCEXS-UPF).

On the other hand, the Advanced Grants (AdG) from the European Research Council (ERC) aim to support research projects on the frontier of scientific knowledge on any subject. These projects must be led by senior researchers from any country in the world who carry out their work in one of the EU member states or associated countries. This year 2020, 185 high-level scientists from Europe have been selected — including Óscar Vilarroya (IMIM) and Ben Lehner (CRG) — and will receive a total of € 450 M.

“The HFSP funding gives us the exciting opportunity to study sperm-egg interaction dynamics and the role of mechanical forces during the fertilisation process in a multi-disciplinary team bridging biology, physics and bioengineering”, says the Cell and Tissue Dynamics programme leader at the Centre for Genomic Regulation (CRG), Verena Ruprecht. The study will describe the exact physical steps that occur when a sperm and egg meet for the first time. Until now, few studies have focused on the dynamic process in which the two gametes get together, interact and fuse.

Óscar Vilarroya is the coordinator of the Neuroimaging of Mental Disorders research group at the Hospital del Mar Medical Research Institute (IMIM). Following a discovery by his group — after pregnancy, the mother’s brain undergoes important changes involved in the way she interacts with her baby — Vilarroya wants to develop an integrative model of adaptations for motherhood during pregnancy and postpartum. That is, how and when the brain is reorganized during pregnancy, identifying the hormonal mediators that direct this process. The project, named BEMOTHER, has been awarded with an AdG grant from the ERC. “The female brain and motherhood have not been studied much, partly due to sexual bias in science. We want to change this scenario,” confirms Vilarroya.

Oriol Gallego, leader of the Live-Cell Structural Biology research group at the Department of Experimental and Health Sciences, Pompeu Fabra University (DCEXS-UPF), has been awarded with an HFSP grant to study the exocytosis process, responsible for transporting biomolecules to the cell periphery and to the extracellular space. Although it has been studied for a long time, the complexity and dynamism of the exocytosis mechanism has not been reconstituted in vitro. Gallego’s team will explore the global mechanism that controls exocytosis directly within the cell with advanced imaging techniques. “We hope that the knowledge derived will benefit various research fields, including biomedicine and neurobiology, where exocytosis plays an important role”, concludes Gallego.

The leader of the Genetic Systems research group at the CRG, Ben Lehner, has received his third ERC grant this year. With this funding, Lehner will carry out the MUTANOMICS project with the aim of discovering how mutations combine with each other to alter phenotypes. Continuing with previous laboratory studies, the project will develop methods that will use mutagenesis to determine protein structures, including the structure of intrinsically unstructured disease-causing proteins. The final goal is that these methods can be used by laboratories around the world. 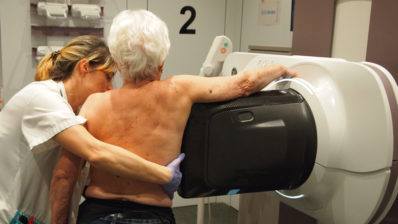 A faster way to visualise breast lesions during a biopsy