The ability of the human eye to detect patterns and a massive participation can be more effective in analysing the cancer genome than existing algorithms. This is the premise behind the citizen science project Genigma.

The DNA strands are packed in the cell nucleus like wool balls, following a specific 3D organisation. Photo by Paul Hanaoka on Unsplash.

The Centre for Genomic Regulation (CRG) is once again embarking on a new citizen science project. After the success of Saca la Lengua, a project to investigate together with the citizenship the microbiota of the mouth and its relation with life habits, a new project of collaborative science begins to take shape.

The project is called Genigma and it will take place between 2019 and 2021, within the framework of the European ORION project, coordinated by the CRG, which aims to experiment with new methodologies to lead researchers towards a more open science.

The goal of Genigma is to create an app to help investigate the three-dimensional organization of the cancer genome.

The goal of Genigma is to create an app to help investigate the three-dimensional organization of the cancer genome. Researchers from the Structural Genomics laboratory at CNAG-CRG, led by Marc Martí-Renom, are comparing the genomic map of cancer lines with normal cell lines. They want to see what parts of the genome are “in contact” with what other parts, because these physical interactions affect the expression of the genes. For this, they want citizens to become ‘genome explorers‘.

In order to create the app with the collaboration of different citizen profiles, three co-creation workshops have taken place. All of them were designed by Elisabetta Broglio (facilitator of citizen science projects in the CRG) in collaboration with the “Jocs al segon” team, which will be responsible for the final design of the game. The objective of these days was to incorporate the contributions of people outside the academic field to the project, from the very beginning. The researchers of the project were present in the three workshops, to which different profiles were invited: experts in bioethics, educators, cancer patients, hospital staff, gamers as well as other more humanistic profiles such as storytellers, journalists, youtubers and graphic artists.

Each workshop focused on one phase of the realization of the game:

About 40 people gathered in the Ramón y Cajal room of the Barcelona Biomedical Research Park (PRBB) for the first workshop. With the aim of creating synergies and co-developing ideas together, the only norm of the day was the ‘plusing‘: it wasn’t allowed to discard someone else’s idea without adding something of your own. In short, taking what works, leaving what doesn’t, and adding something new. 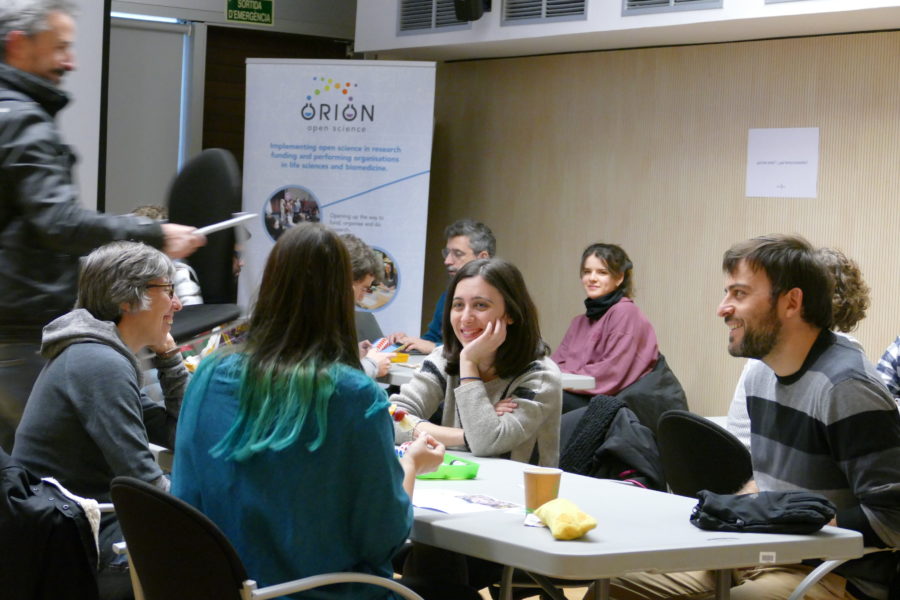 The session began with an exercise that, at first glance, did not have much to do either with a scientific project or with a mobile application, but that would be essential for the task. The participants practiced the difficult ability to put themselves in the skin of the other and think about different ways of communicating an idea. Thus, mixed groups of researchers, communicators, educators, and doctors, as well as designers and other profiles, became for a moment Woody Allen or Harry Potter to solve challenges by trying to think through stories, through magic, creating things by pieces or inspired by nature.

Next it was the turn of the scientists. In a few minutes, Marco Di Stefano and Juan Rodriguez, project leaders from the CNAG, had to explain to a mixed audience (other scientists and people without scientific knowledge) what the aim of their research project is – and how citizens can help obtain it The participants of the workshop began their collaboration indicating which concepts were not clear (such as chromosome, translocation or polymer).

To finish, the participants invented, drew and voted the best metaphors to try to explain some of the important concepts. Thus, wool balls of different colors disorganised in a box, or a set of chairs and cutlery, helped explain how DNA is packaged, or the complex concept of translocation, in which pieces of different chromosomes change position. 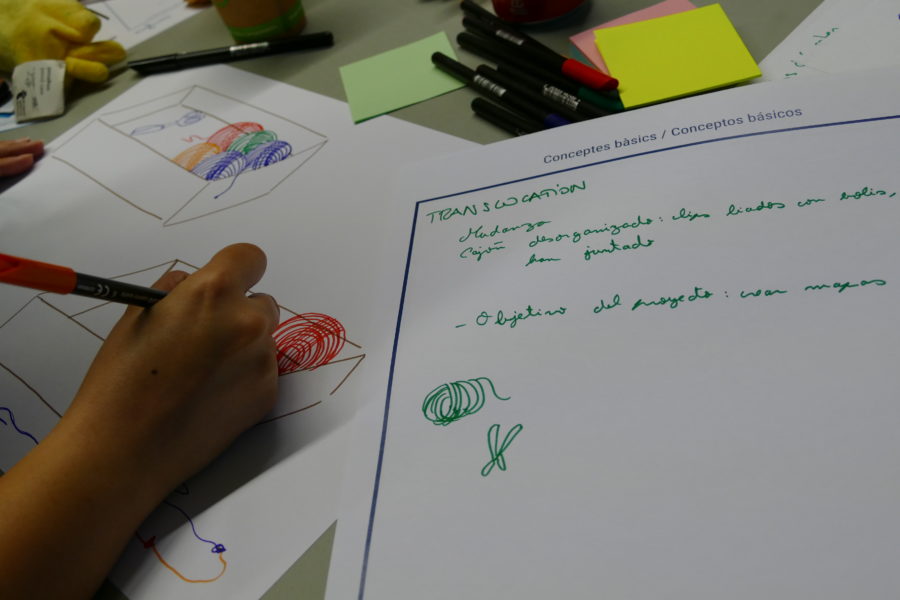 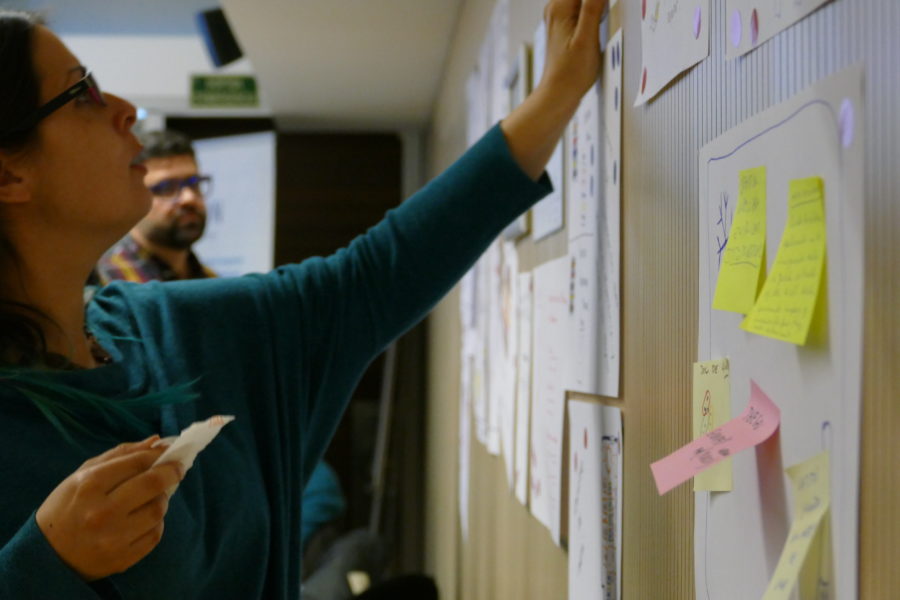 By the end of the session, everyone had a clearer idea of ​​both the importance of the three-dimensional organization of the genome and the mission of the Genigma project. There is a reference map of the healthy human genome, but there is no one of the cancerous genome; the objective of the researchers is to decipher this map. For this they are generating algorithms, but “the human eye is able to better see the reorganizations of chromosomes“, they explained.

The human genome is made up of about 3,000 million nucleotides or ‘pieces’. Through the app, about 100 pieces will be sent to each player. These pieces represent real data from Marc Marti-Renom’s lab experiments at the CNAG, and players should look for patterns. “When we have many people analyzing the same segment, the most likely solution will be the one that most people reach, as long as the laws of biology and physics tell us it is possible. From the research team we will be in charge of providing the experimental data for the app and of validating the solutions provided by the citizens to achieve realistic results”, say Marco Di Stefano and Juan Rodriguez from CNAG.

This will be the scientists’ job: to validate the solutions provided by the public in order to achieve realistic results, “explains Elisabetta Broglio, from the Communication department of the CRG and project manager of Genigma.

There is a reference map of the healthy human genome, but there is no one of the cancerous genome; the objective of the researchers is to decipher this map.

Shaping the creature – workshops #2 and #3

The second workshop took place on February 9 at the Sagrada Familia Library. Cancer patients, associations and family members were invited. After an introduction to the project and the objective of the app, they discussed what emotions the app should generate. Fun was the main one, of course, but also curiosity, belonging to a community and satisfaction for knowing that it is helping to better understand cancer.

With titles as original as “When Zipi meets Zape” or “With their hands in the dough” the thirty people who shared theis Saturday morning ended the session imagining worlds and characters that could bring the app to life.

These contributions were the fuel for the third and final workshop, in which those most familiar with apps and videogames  – those who design them and those who play with them – offered their valuable experience to finish shaping the game. Thus, different game dynamics were debated, it was reflected on how much science should appear in the game and at what moment and, finally, a series of prototypes were generated that will serve as the basis for the final development of the Genigma app. 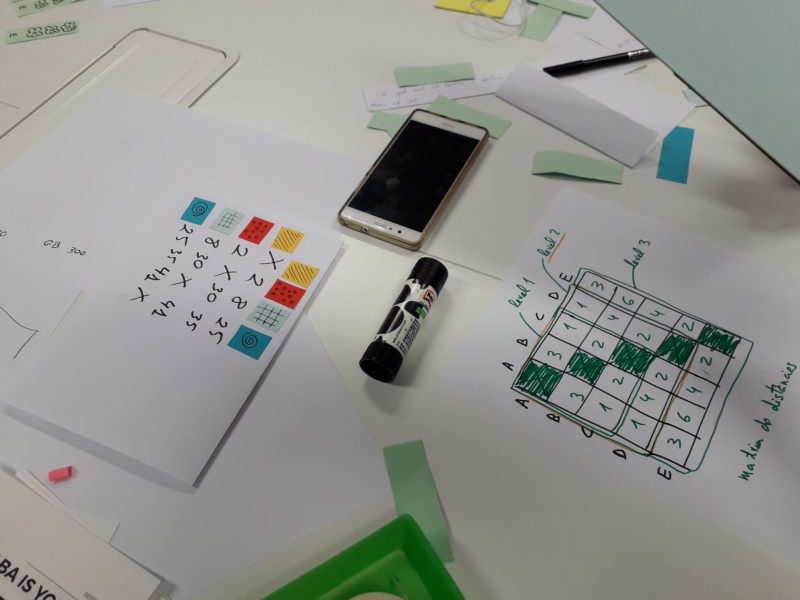 Now the gamification team hired by the project, “Jocs al segon“, is working with all the material obtained in the workshops to create the beta version of the app, which will be tested on different occasions before the presentation of the game. You can follow the evolution on the Genigma website where a blog will be published to keep track of the whole process.

If you want to get to know better the Genigma project directly from the scientists involved, as well as discover other participative science projects, check our the program of Calidoscopi cultural, a festival dedicated to citizen science that will take place in the Sant Andreu district (Barcelona) during the month of May.

Citizen scienceCRGGenomeOpen Science
About the author