The epithelium, tissue formed by one or more layers of cells joined together, is believed to be the first form of multicellular organization to appear. Its presence in all animals makes the epithelium characteristic of these organisms.

The discovery of an epithelium-like structure in the multicellular phase of social amoebae (Dictyostelium discoideum) — single-celled organisms that present a stage of multicellular development in their biological cycle — led scientists to think about the possibility that the origin of the epithelia was prior to the appearance of animals.

In 2018, researchers at the Institute for Evolutionary Biology (IBE: CSIC-UPF) discovered that the single-celled organism Sphaeroforma arctica also presents this multicellular stage in its development, which manifests typical characteristics of an epithelium.

This epithelial-like structure originates from the cellularization of a cenocyte, a multinucleated cell resulting from multiple nuclear divisions without cytokinesis.

This year, the same IBE researchers have shown that this cellularization process happens thanks to molecular mechanisms typical of animals. Specifically, they observed it occurred via the assembly and disassembly of a cortical network made of actin and myosin.

In this picture, we can see the different phases of the cellularization process in S. arctica. Two different markings are appreciated:

Thus, the finding made by these IBE researchers confirms the appearance of molecular mechanisms for the formation of epithelia in organisms with an evolutionary origin prior to animals. 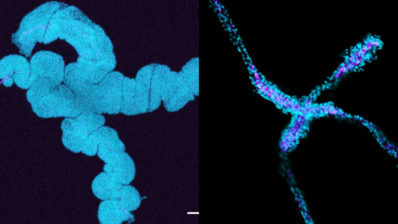