A study led by the IBE has designed a genetic circuit to induce the critical state in living cells and study the patterns of behavior.

The study has managed to induce the critical state in bacteria. Credit: Ricard Solé

A multidisciplinary study co-led by Ricard Solé and Núria Conde, from the Complex Systems Laboratory of the Institute of Evolutionary Biology (IBE: CSIC-UPF) has created a new genetic circuit in bacteria to study the behavior of living organisms.

The research, which includes among others experts in physics, biomedical engineering and mathematics (in collaboration with the Center for Mathematics Research), is based on inducing the critical state in living organisms. This critical state is the boundary between order and disorder, a state that allows systems to respond quickly to environmental changes. Thus, the induction of this state in bacteria, through a genetic circuit of only two genes, will allow us to see how they adapt and behave.

“This opens up the possibility of designing new patterns of behavior and studying the origins of cognition on smaller scales”
Ricard Solé, IBE principal investigator and co-head of the study.

The article, published in Nature Communications, suggests that the enzymatic networks of cells and different cognitive mechanisms of organisms could be in this critical state, which would facilitate the adaptation and processing of information, respectively.

The PRBB centres participate in the Science Festival with debates, games and workshops 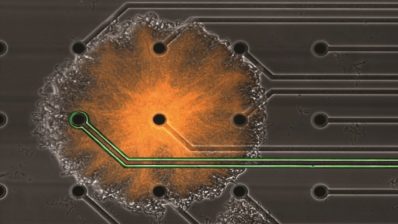