International researchers, co-led from the IBE in Barcelona, ​​have used paleoproteomics to go back 2 million years and solve the mystery of an extinct giant ape.

The study of ancient DNA (paleogenomics) has allowed us to discover great mysteries about our past. But everything has a limit, and that of ancient DNA is about 400,000 years. In older samples, the so-called ‘molecule of life’ is too degraded and information can not be extracted from it. For that reason, the study of fossils older than 400,000 years has so far been limited to their anatomy, comparing sizes, shapes and extrapolating from biomechanical studies.

Now, a team of researchers from Spain, Denmark and China, have made a qualitative leap and, using paleoproteomics – the study of ancient proteins – have been able to unravel the molecular mysteries of a fossil more than 2 million years old.

The fossil is a tooth from Gigantopithecus blacki, an extinct primate of which only a few teeth and fossilized jaws remain. Since the first remains of this ape were discovered in the 30’s, scientists have based analysed their morphology to hypothetize that it was herbivorous, up to three meters high, weighing 500 kg and living in forests in current Southeast Asia until about 300,000 years ago. The experts did not agree, however, in where to place this simian in the evolutionary tree; was it a very archaic hominid, or did it belong to the apes lineage?

The researchers, co-directed by Tomàs Marqués-Bonet at the Institute of Evolutionary Biology (IBE: CSIC-UPF), Enrico Cappellini at the Globe Institute in the University of Copenhagen, and Wei Wang at Shandong University in Qingdao, China, obtained some milligrams of enamel from a tooth found in a cave in Chuifeng, China. When sequencing, they recovered about 500 fossilized amino acids – the basic units of proteins. Comparing these amino acid sequences with the dental enamel proteins present in the databases they determined that they belonged to 6 proteins.

Protein analysis of a 2 million years ago teeth – the earliest molecular data studied to date – has shown that Gigantopithecus blacki belongs to the same clade as the orangutan, its nearest living relative

“The separation of Gigantopithecus from the current orangutan is very distant, more than 10 million years ago, and the old ape had many characteristics that resemble those of humans and other great apes, which would explain the previous confusion in the field”, says Tomàs Marquès-Bonet, ICREA Researcher and director of the IBE with double affiliation at the National Center for Genomic Analysis (CNAG-CRG) of the Center for Genomic Regulation (CRG) and the Miquel Crusafont Catalan Institute of Palaeontology (ICP).

The paleoproteomics technique developed by the team could be used to clarify the evolutionary history hidden in fossils too ancient to preserve the DNA. “Right now, the technique has allowed us to recover fossilized proteins in tooth enamel,” says Marquès-Bonet, “but it could be used with many other bone remains to reveal the vast antiquity of human evolution, which we still don’t know much about”, he concludes.

You can hear Marquès-Bonet talking about this research, the technique used, and its implications (audios in Catalan). 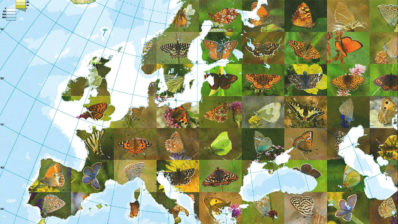 Roger Vila (IBE): "Being able to compare data from all butterflies is a luxury"