On March 15, 2006, the  Biomedical Research Park of Barcelona (PRBB) was inaugurated with the promise of becoming the main player in biomedical research in southern Europe. Politicians, the media and researchers themselves were confident that this new scientific infrastructure would position Barcelona in the “Champions League” of biomedical research, and so this inauguration was celebrated euphorically. Even so, no-one in Germany, the UK, France or California paid attention to this event. The capital of Catalonia was a city associated with art, architecture, design, food and the Mediterranean lifestyle at its best. Back then, the city did not appear on the international scientific community’s radar of significant biomedical research. “My colleagues laughed at me when in 2000 I told them I was moving to Barcelona”, remembers Reimund Fickert, the German director of projects at the PRBB and its first employee. Today people no longer laugh when scientists announce their move to one of the centres at the PRBB.

“We are committed to doing research that is useful for the health of citizens and producing a new generation of knowledge, created through interdisciplinarity.”
Jordi Camí, PRBB

Today, the park has a critical mass of 1,500 people from 50 countries, cutting-edge technical and scientific services, an incredible diversity of research perspectives ranging from molecules to populations, and internationally recognised scientists. The transformation of Barcelona itself has also helped. New research centres and infrastructures like the Science Park (PCB), the MareNostrum supercomputer, the ALBA synchrotron, and other outstanding research facilities at local university hospitals, as well as ICREA research contracts for top scientists have labelled Barcelona as being driven to survive in the modern knowledge economy

The first move towards promoting a biomedical research park next to Hospital del Mar dates from 1985, when Jordi Camí, at that time director of the IMIM, drafted the initial proposal. He garnered immediate support from Joan Clos, the then health commissioner at the city council, who later, in 1997, took over city hall from Pasqual Maragall. However, in late 1987 Barcelona beat Paris and Amsterdam in the fight to host the 1992 Summer Olympic Games. All political energy was diverted into preparations for the games, and the biomedical research park was put on ice.

Nevertheless, one major pre-Olympic incident laid the foundations for the PRBB’s success. Once the technical and feasibility reports on the research park had been approved, in 1991, Barcelona’s Urban City Planning Committee classified the site next to the hospital as a “biomedical park”, meaning that nothing else could be built there. Another repercussion of the Olympics was the opening of the city towards the sea, with artificial beaches, a promenade and an Olympic harbour, generating the tourism magnet the neighbourhood of the PRBB is today. In addition, the IMIM took charge of setting up the official anti-doping laboratories for the games in a newly constructed curved building attached to the Hospital del Mar, which was inaugurated in 1992. This would later become the headquarters of the IMIM and then, from 1997 onwards, also of the Faculty of Health and Life Sciences of Pompeu Fabra University (CEXS-UPF), set-up by Jordi Camí.

Once the final political agreements had been signed between the UPF and Barcelona City Council, the project began to develop architectonically, leading up to the start of construction in 2001. In 2005, the PRBB Consortium was founded by the UPF (20%), Barcelona City Council (30%) and the Catalan Government (50%) to manage and maintain the park and its facilities, and prepare for its inauguration in 2006. The first entities to establish themselves at the park were the IMIM, CEXS-UPF, CRG, CMRB, IAT and CREAL who occupied 100% of the initial 35,000m2 of research space in the building.

Local architects Manuel Brullet and Albert de Pineda designed a scientific infrastructure where researchers could come together, establish connections and communicate with each other within a flexible, alveolar structure. In spite of the technological complexity of the building, at the time it represented a new line in austerity. It comprises mainly wood, metal, concrete and glass. This is compensated for by a richness of space and the urbanistic expression of volume. In fact, the PRBB with its 55,000 m2 is one of the largest and most unique buildings in Barcelona and would occupy one whole block in the Eixample district.

The construction, which started in September 2001 and finished in October 2006, cost 120 million euros, including all laboratory and office furniture as well as the equipment for the animal facility. With its fluid geometry and conically elliptical shape, the building has no classical front view and appears weightless. The exterior façade of red cedar panels controls the entry of sunlight and streamlines the structure. Since this does not touch the ground, it reinforces the floating sensation.

“The building is striking for both its beauty and exceptional location by the sea. It is an aesthetic attraction which lends dignity to scientific activity.”

The park was first built “bottom-up” using temporary vertical struts until the upper suspension structure at the roof was reached, at a height of 36.5 m. After that, in a “top-down” manner, an external metal framework of tensors was connected to steel clamps on the roof. Once 60% of the weight of the building had been transferred to the roof, this suspension allowed the removal of the temporary structures and gave rise to large open spaces with only few columns on each of the 7 above-ground floors. This provided great flexibility when adapting the laboratories and offices, which have always been 100% occupied, according to the needs of the scientists.

The PRBB has become what it is today thanks to the efforts of many, but in particular the people who make it up: an international community including around fifty nationalities and 100 research groups studying everything from the molecular issues in biomedicine to populational aspects; from experimental biology to theoretical and computational studies; from the most basic to the most applied and translational research. In this unique building, research groups looking at cancer interact with others studying systems biology and bioinformatics; staff from clinical physiology labs have lunch with genomics and epidemiology groups; teams of evolutionary biologists play volleyball with neuroscientists and physicists who study complex systems; social workers have coffee with experts in stem cells and medical doctors.

This cross-hybridisation helps in the production of excellent research. Proof can be seen in the more than 1,200 articles published per year, 20-plus prestigious grants from the European Research Council (ERC) held by scientists in the park, and in excess of 300 scientific conferences each year.

The PRBB is a coalition of a university, a hospital and several research centres that have all received the highest national accolades in their categories: the CEXS-UPF has been awarded the Maria Maetzu Unit of Excellence distinction for universities; the IMIM-Hospital del Mar Research Institute has been appointed Health Research Institute; and the CRG has been recognised as a Severo Ochoa Centre of Excellence.

“I have seen the PRBB grow since the day it was born. For me, being part of the park’s varied community has meant scientific collaboration and exchange in a multidisciplinary environment, one of the most important values of the PRBB. Communication is easy here!”
Fátima Gebauer, PI at the CRG

The scientific facilities shared between the centres at the park are key in this success and a good way to attract talent. Having one of the two most accurate mass spectrometers in the world, one of the most technologically advanced flow cytometry units in Europe, and one of the continent’s most complex and automated animal facilities does not go unnoticed by those who wish to come and work here.

What has been achieved is no small thing. The fact that others who are now starting elsewhere are following similar strategies proves that we have done well. The new Francis Crick Institute in London, which will open this year and even shares certain aesthetic similarities with the PRBB, will make a point of assembling a critical mass in a single building to work on very diverse topics in biomedicine. As its director Paul Nurse says: “Building bridges between disciplines takes time, but the rewards can be immense. Interesting things happen at the boundaries where subject areas meet, because it is stimulating to be with people who think differently.”

The PRBB has been and is a meeting point for different disciplines, and the excellence of the researchers who work here proves it. In order to remain a desirable destination for the new talent that will surely arise, the commitment to maintaining this cutting-edge research must continue.

The coming years will mean further changes. Some centres will leave, others will arrive. New biomedical challenges will require new technology, greater resources and more imaginative ways of carrying out cross-disciplinary and cooperative research. As Ian Mattaj, director of the EMBL in Heidelberg, says: “The park works well thanks to its large critical mass. But to have a successful research environment there must also be the willingness to co-operate.” The PRBB has already demonstrated its alacrity in this respect, and it has borne fruit. Now the park must continue to move forwards.

A community that rocks

Social activities: The PRBB community is young, dynamic and social. Every year more than 500 people participate in the beach volleyball tournament, with games every day over four months. This event, along with an orchestra, choir, yoga classes and charity breakfasts organised by the Incubakers – all activities set up by the residents themselves – help create connections and synergies and unite the park’s incredibly diverse community.

Outreach: The excellent research that takes place at the PRBB does not stay hidden inside its walls. The Open Day is an annual event for the citizens of Barcelona, where more than 3,500 people get first-hand experience of the research that takes place within the PRBB centres. Over the rest of the year, nearly 12,000 people visit the park’s facilities and more than 200 high school students participate in the PRBB Award. But people can also find out about activities at the park through the monthly newspaper El·lipse, or by following the PRBB on social networks, just like more than 8,500 people already do.

Training and good practice: In order to do the best research one needs more than just scientific knowledge. Leadership, professional development and communication are skills not traditionally taught in technical degrees, and the “Intervals” programme at the PRBB is responsible for filling this gap. Each year, about 400 people, both scientific and administrative staff, take advantage of the 30-plus free continuing-education courses. Good scientific practices are also high on the PRBB’s agenda, through a code common to all the centres, a course in research integrity for PhD students, and various other activities organised by a working group with members from all the centres. 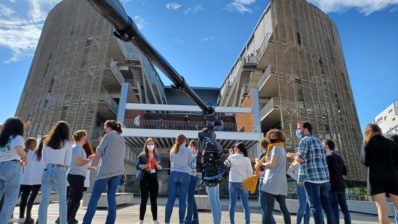