Alexandre Celma Miralles, a PhD student at the UPF, tells us about his research on the neural basis of rhythm processing in humans and other species.

Moving our body following the beat of a song requires great coordination from our brain. | Picture by Alexander Popov on Unsplash.

Alexandre Celma Miralles is one of the young researchers that participated in the science talk competition Rin’4, organized by the Pompeu Fabra University (UPF). In this article, Alexandre tells us about what he has learned during his PhD research.

Imagine we went out to a concert and the singer asks us to clap following the rhythm of the music. Immediately, everyone starts clapping following the pulse, and moving to the beat of the song. This synchronization between people’s movements and music is not as trivial as it seems, since music goes beyond sound: it is a conglomerate of multimodal stimuli.

The brain has to deal with auditory, visual, vestibular and proprioceptive information to be able to synchronize the body movements with the rhythmic patterns that it perceives through each sense. The information received by the brain is transformed into neuronal oscillations, i.e. into changes in the electrical activity of neurons that may correspond, for example, with the rhythms of the auditory or visual stimuli that are being processed.

When we listen to music, the auditory, visual, vestibular and proprioceptive information that the brain receives is transformed into neuronal oscillations, that is, changes in the electrical activity of neurons.

By placing electrodes on the head of participants, we can record the “echoes” of these oscillations in the form of electroencephalograms (EEG), and discover if the neuronal oscillations are synchronized with the beat of the music. This is what we do at the Language and Comparative Cognition group of the Center for Brain and Cognition, led by researcher Juan M. Toro. Our goal is to better understand the biological basis of the rhythm of music, both the neuronal structures that allow it to be processed and the evolution of these abilities in other species.

In a first study (1) we have approached the perception of beat and meter (i.e. how the beat is grouped) at the visual level. Both in music and in dance, visual stimuli are very important for everyone to synchronize with each other. To study the projection of the meter on a visual beat, we recorded encephalograms of musicians watching an intermittent circle. Next, we asked them to imagine a ternary structure (that of the waltz) to group the flashes into cycles of three. Only with the imagination, the neuronal activity of the musicians was synchronized with the frequency of the ternary rhythm, a fact that suggests that the meter is not restricted to the auditory modality. Thus, the brain seems capable of applying similar mechanisms in different senses. Dance and music could be artistic manifestations that diverge in organizing sounds and gestures on a temporary level.

In a second study (2) we approached the perception of the rhythm within the dimension of sound. If we listen to a symphony orchestra in an auditorium, we’ll find the deep instruments like the double bass or the tuba on the right playing slower tones, while the more high-pitched instruments, such as the violin or the flute, will be on the left playing faster tones. The setup of fast and slow rhythms in space could be linked to the integration of the beat and meter. To study it, we recorded the encephalograms of musicians and non-musicians who heard the same sound alternating from side to side following a ternary pattern: right-left-left, right-left-left… This alternation in space caused the neurons to synchronize with the frequency of the ternary rhythm. The synchronization of the neurons of the participants who had studied music was more precise regarding the perception of beat and meter compared to those who had never received musical training, even when the first ones where watching a silent movie to distract them. This discovery shows that, although it has traditionally been associated more with vision, space also plays a relevant role in the ear and rhythmic perception.

So far we have seen that the rhythm of music goes beyond the “sound” limits. However, a key piece of our research is to understand how these cognitive mechanisms have evolved in different species (3). With regards to the rhythm of the music, it has been observed that animals such as the cockatoo Snowball or the Californian sea lion Ronan are able to synchronize with the pulsation of songs. There are also songbirds that can distinguish the beat in regular rhythms, and non-human primates who can follow it fairly well with the finger. We wanted to study the rhythmic perception of a non-human mammal: lab rats.

Animals like the Snowballo cockatoo, the Ronan sea lion, as well as songbirds, can distinguish the pulsation of songs… Can rats as well?

In a first study (4), the rats were trained with positive reinforcement to distinguish regular rhythms from irregular rhythms. When listening to rhythms at new speeds, these rodents were able to detect temporal regularity. In a second study (still under review) the rats were familiarised with an excerpt of the “Happy Birthday” song. When they listened to a version that mixed the rhythms (the duration of each note) but maintained the order of the notes, the rats reacted differently. However, they didn’t do so when they listened to a melody that kept the rhythm of the song using only a single note. This means that they based their discrimination on the organization of the rhythms of the song. These studies suggest that rats are sensitive to the regularity and the rhythmic structure of sounds, and that these universal aspects of music go beyond the human species. So, every time we go out to a concert, it would be interesting to imagine that maybe we are not the only animals that are enjoying the rhythms of music! 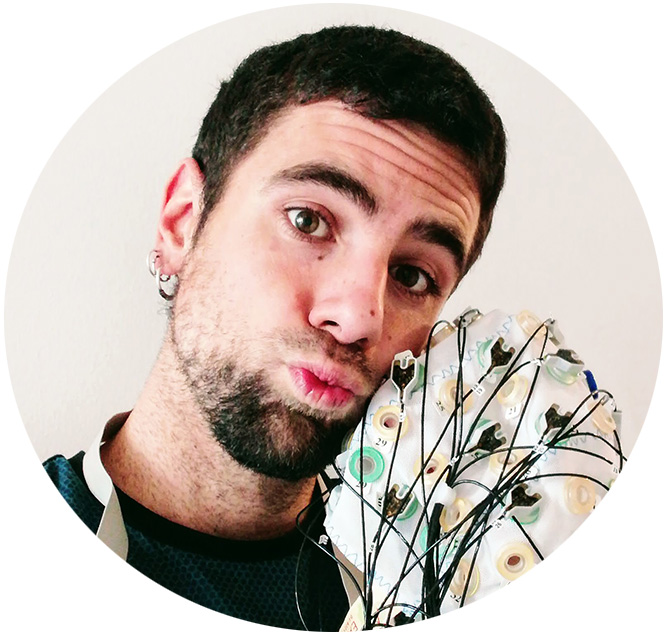 Alexandre Celma Miralles pursued the International PhD in Biomedicine in the Center for Brain and Cognition (Universitat Pompeu Fabra) and is currently working in the Center for Music in the Brain (Aarhus University). His research focuses on the biological origins of music cognition, exploring the neural bases of rhythm processing in humans and the evolution of this temporal abilities in other species.
By Alexandre Celma Miralles
0
Share