CRG researchers discover how neurons send genetic code to the right place at the right time. This process is crucial for the formation and storage of long-term memories.

It is revealed for the first time how neurons carry essential genetic code for their growth and movement, thus promoting the formation and storage of long-term memories. | Picture by Anita Jankovic from Unsplash.

Thanks to the combination of two proteins, the messenger RNAs (mRNAs) that code for two components of the cytoskeleton — actin and tubulin — can travel to the synapses, where they are translated to proteins and promote the formation and storage of long-term memories.

This is the recent discovery by researchers at the Centre for Genomic Regulation (CRG), which offers new insights into how neurons carry the information needed for their growth and movement to the right spot. This process is especially important during brain development, as it helps neurons find their place in this organ, and during memory formation.

“Repeatedly stimulating a synapse continuously reinforces the attachment between the two neurons, which is thought to be how memories form”

The cytoskeleton components needed at the synapses travel there not as proteins, but as mRNAs, which are then translated to proteins only when needed. Until now, it was thought that neurons get the mRNAs to the right place at the right time thanks to kinesins, proteins responsible for transporting molecules. However, CRG researchers have been able to confirm that KIF3A/B kinesin can transport mRNA thanks to its combination with the Adenomatous Polyposis Coli (APC) adaptor protein. Both proteins — KIF3A/B and APC — transport at least two types of mRNA that encode tubulin and actin, essential components of the cytoskeleton. The cytoskeleton is responsible for shaping cells and, in neurons, allows for new connections to be established. 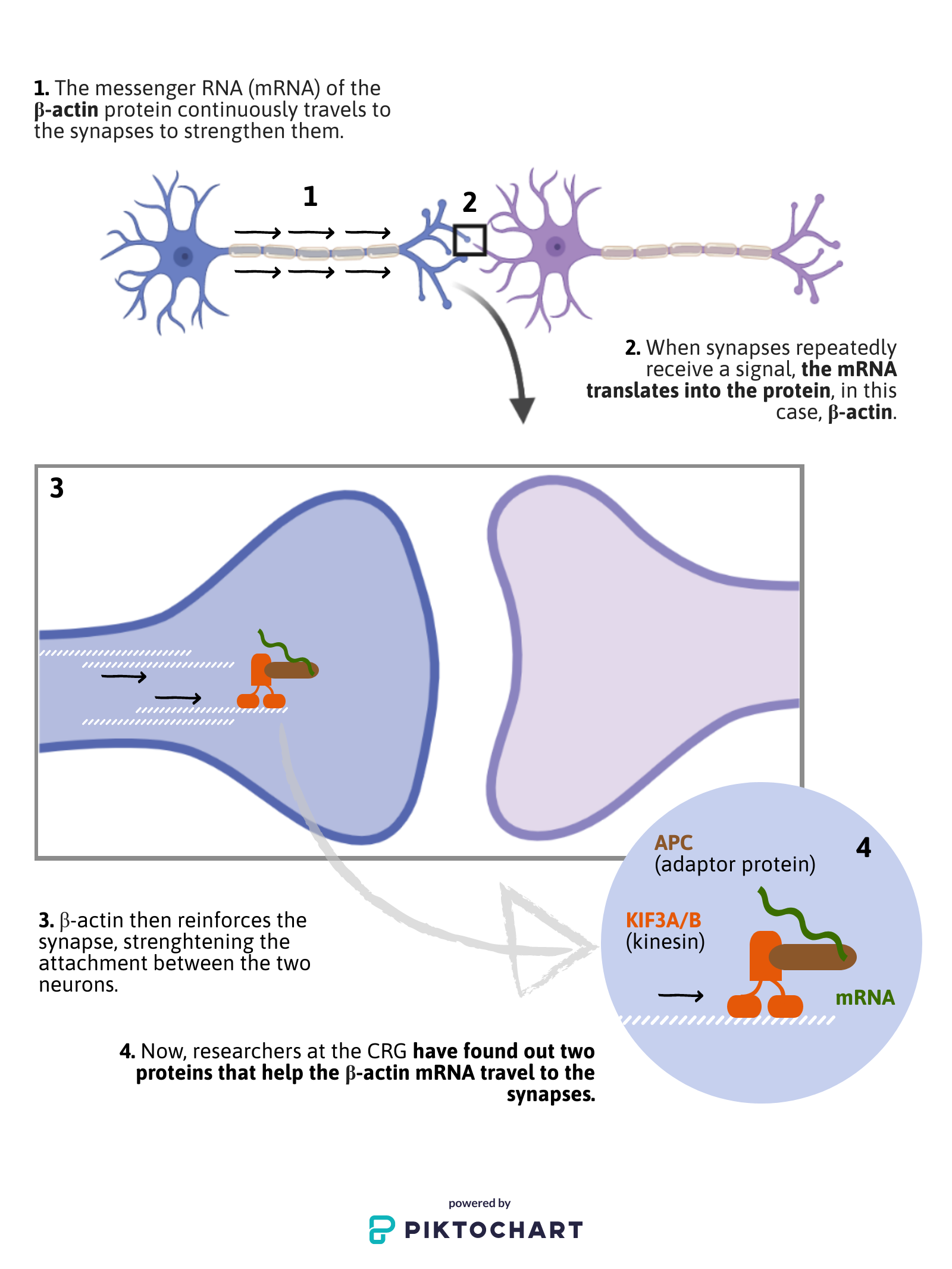 Previous studies had already shown that genetic information transported by mRNAs coding for β-actin continually moves to synapses. There, upon repeated stimulation of the synapse, the mRNA is translated to the β-actin protein, which reinforces the junction. This is thought to be how memories form. This new study shows how that mRNA is transported.

“We will continue to investigate the transport systems that make up a neuron’s complex logistical network. Understanding the molecular machinery underlying the development of brain cells will be key to combating global challenges like dementia and neurogenerative diseases”, concludes the lead author of the study and CRG researcher, Sebastian Mauer.

How do our genes influence our ability to overcome COVID-19?